CLASSES ON MONDAYS AND WEDNESDAYS

ALSO ONLINE CLASSES AND SEMINARS
AT THE TSE QIGONG CENTRE 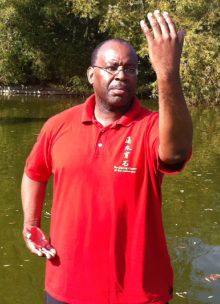 Sifu Earl Gottshalk
You don't have to have any prior knowledge of Qigong (also known as Chi Gong) as anyone from beginner onwards can learn naturally, how to improve their health both in body and mind by practicing Kunlun Dayan Qigong, (Wild Goose Qigong) which teaches flexibility, balance, coordination and relaxation.

It is a profound healing skill that has been passed down from Master to student for over 1,800 years and up until recently was only taught to one student at a time. Each student had to keep the skill secret until they were over 70 years of age before they were allowed to pass it on to the next student.

The Bar Headed Geese with their ability to travel long distances and reach heights that other geese could not, were observed both by Daoist monks and a famous Buddhist monk known as Wei Dao An, who realised that by imitating the movements of these geese, they could heal illness, improve flexibility and so live longer.

Great Grandmaster Yang Meijun opened this skill to the public when she was over 80 years old.  She also taught a number of her own specially chosen students, one of them being Grandmaster Michael Tse of the Tse Qigong Centre where my Sifu (teacher) Mike Baker, is a Senior Student. 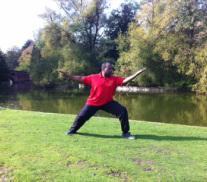 Sifu Earl Gottshalk
Taiji, sometimes known as Tai chi, is more popularly known today for its use as a health exercise. However, it was originally also used for fighting and Chen Style Taijiquan is practiced not only for its natural health benefits but for self-defence and has many forms including weapons such as sword, broadsword and spear.

The Chen family have studied and practiced this skill for hundreds of years
and the present day Standard Bearer of Chen Taijiquan is Great Grandmaster Chen Xiao Wang.

Taijiquan will help you learn how to relax and calm the mind, maintain a good posture, move from the waist to use spiral energy to defend yourself and with time and practice the body will become more flexible, healthy and strong covering Yin and Yang energy.

My Sifu (teacher) is Mike Baker who is a Senior Instructor at the Tse Qigong Centre.


FOR FURTHER INFORMATION AND UPDATES GO TO NEWS PAGE
Next Page